You are here: Home / Kickstarter Blog / Yelp – Friend or Foe?

Yelp – Friend or Foe? There are many stories in the small business world of business owners being subjected to the “shakedown” when contacting Yelp regarding a known fake negative comment.

At this point in time, we have found that the best method for counteracting this is to just encourage as many positive postings on other sites as possible. This “dilutes” the negative comments on Yelp.

The article below taken from The Dallas Morning News provides some real-world examples: 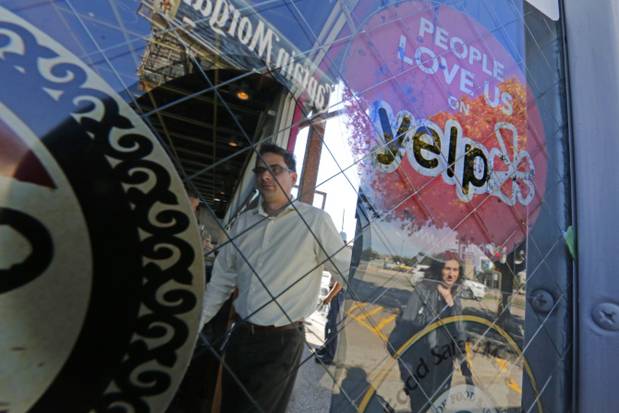 Nathan Hunsinger/Staff Photographer
Paul Hanlon and Stephenie Bowen walk into Velvet Taco, which proudly displays a Yelp sticker. The restaurant has 490 prominent reviews on the site, with a rating of four out of five stars.

To this day, potential customers sometimes walk into Diana Ortiz’s beauty shop in San Antonio and expect her to be rude. And why not?

If you put her business name — Salon Cadiz — into an Internet search engine, a one-star review on the Yelp website pops up.

Y.P. writes: “I called the salon to make an appointment and spoke to the owner. She was rude and her tone gave me the impression she had something better to do. Needless to say she will not be getting any of my $$$.”

Not long after that comment started appearing prominently in searches, Ortiz says, her business began dropping. People don’t like rude. Only she says it isn’t true.

“I’ve sank thousands and thousands of dollars into my business. I’m very grateful if somebody calls in to my business and inquires. All of a sudden I get this bad review. She never stepped foot in here.”

Ortiz tried to get Yelp to remove the negative review, but what happened after that only made matters worse.

[Online Reviews Can Make Or Break A Business]

More than ever, online reviews can make or break a business. One of the most prominent sites is Yelp, which offers a platform for the public to review for free almost any kind of business, including stores, doctors, hospitals and restaurants.

The results show up high in Internet searches, out of the control of business owners. Comments are usually anonymous. They can help or harm, more often the latter, critics say. Too often, business owners get fed up and don’t counter negative reviews. But then there are businesses like Velvet Taco in Dallas that use Yelp to build a huge following. More on that later.

Yelpers — anyone who registers for free to review on the website — now review in 22 nations. Company officials claim an average of 108 million unique visitors each month. One anonymous comment can do a lot of damage.

The real problem for some businesses is that Yelp filters comments and decides which ones to present prominently and which ones to make all but invisible.

Yelp officials explain that they filter reviews to eliminate fakes posted by business owners about themselves or by paid reviewers. Otherwise, the company, which has never made a profit but has a stock price that quadrupled in the past year, claims it loses online credibility.

In New York, the state attorney general recently caught 19 businesses in a sting operation writing or paying for fake reviews about themselves on Yelp and other sites in violation of that state’s law. Texas doesn’t have a law regulating fake reviews online on community websites.

Ortiz believes her rude review was faked. Here’s how.

By her telling, her troubles began after she registered her business on the Yelp site with the proper name and address so people could find her. After that she received a call from a Yelp salesperson asking her to pay to advertise on the site. She declined.

After that, she says, the rude comment was posted from someone with the initials Y.P. In Ortiz’s mind, Y.P. is someone from Yelp in retribution for not advertising.

When she tried to talk to a company rep, she complains, she had a hard time. Her counterstrategy was to ask her best customers to tell the other side. More than 20 reviews were written about her

“Haha. I can’t imagine her being rude to anyone,” one stated.

But Yelp surprised her and hid the reviews behind a small hard-to-find tab labeled “Filtered.” Most prospective customers don’t find these.

For her salon, only two reviews are front and center, one positive and one negative. The positive one was added, she says, after she complained to the Texas attorney general that Yelp harmed her business.

I did an open records request with the Texas attorney general to learn if other Texas business owners say anonymous reviews are hurting their business. That’s how I met Ortiz, and also Shelly Boucher, owner of an Austin dog grooming business, Diamonds in the Ruff. She says she believes that “if you as a business owner purchase Yelp advertising, then all good reviews become visual.”

Yelp spokeswoman Kristen Whisenand says that’s impossible. “There’s never been any amount of money you can pay Yelp to manipulate your reviews.”

But Boucher insists, saying: “People like me who have very little money fighting Yelp, you’re kind of stuck. You have to advertise with Yelp.” She refuses, and she pays a price, she says.

“Once Yelp came on the scene, it dramatically changed my business. The phone calls have been cut in half at least. I can only hope that people go to Google and CitySearch,” she says, naming competitors.

Kelly Varwig, owner of Kerrville restaurant Salada’s, says anonymous comments on Yelp hurt his business. “There’s no way to defend yourself,” he says.

If there’s a secret sauce to getting Yelp to display more prominently a business’s positive reviews and keep them out of the nearly hidden place on its website, it’s not about advertising, the Yelp spokeswoman insists. Rather, reviews written by trusted or elite reviewers who review a lot and have credibility are treated with more prominence. That’s what’s behind Yelp’s secret formula, Whisenand says.

Rounding up your favorite customers for a quick round of reviews is gaming the system, she explains. A trusted (or consistent) reviewer who comes in naturally is more likely to lead to a trusted review displayed with prominence, she says.

Here’s a problem I have with that explanation. The Y.P. who socked Ortiz’s business only has one other review in her writing credits.

The spokeswoman directed me to a Yelp success story in Dallas — Velvet Taco, a popular restaurant in the Knox-Henderson neighborhood. The other day when I talked to general manager Josh Garcia, the restaurant had 490 prominent reviews on Yelp, with a rating of four out of five stars.

Garcia says new reviews appear almost every day. The restaurant monitors reviews for problems and suggestions. The business lives a separate digital life on Yelp, he says, a mode of communication most preferred by those in their 20s and 30s.

Bottom line: A modern business lives two lives — one in real life and the other digital. Each plays off the other. In the accompanying text, I’ll show what I learned a business can do to combat a negative comment on a website such as Yelp.

How to counter negative business reviews

Take advantage of free services offered by established Web directory sites such as Google, CitySearch and Yelp. Complete a business profile and upload photos for free.

Respond to comments, both negative and positive, to further engagement.

Build business profiles on respected free websites such as YouTube, Facebook, LinkedIn, Pinterest and Tumblr to knock down other negative reviews in search results. Use a blog to create fresh results for search engines.