Small Business Owners vs Washington in 2014

In our view, if you’re waiting for help from Washington for your small business – DON’T HOLD YOUR BREATH!

What small business owners want from Washington in 2014 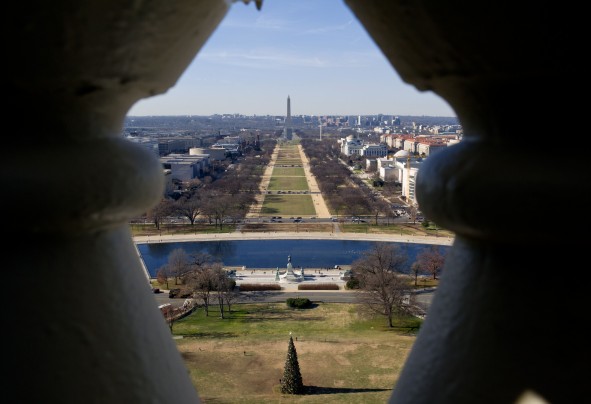 We asked entrepreneurs across the country what they are hoping for next year in Washington.

Congress made headway on several major pieces of legislation this past year, but it fell short of actually passing much of anything. Heading into the new year, small business owners are hoping they finally push some of those bills across the finish line.

On Small Business reached out to dozens of small business owners across the country to find out what they wanted most from policymakers in 2014 — in other words, which items were on top of their wish lists for Washington.

Many, it turns out, are primarily concerned with overhauling the tax code, while several others have their sights set on immigration reform. Others are hoping lawmakers will take up bills to address intellectual property, exporting resources and climate change.

Still, there was a common theme among many of the responses: Most want a lot less bickering and a lot more action out of the officials representing them in Washington.

Here are some of the best responses we got from small employers and entrepreneurs.

Dal LaMagna, owner of IceStone, LLC, which produces durable surfaces like counterparts out of recycled materials in Brooklyn, New York:

“Comprehensive immigration reform is at the top of my list. The issue has been a central focus in the news for many months now, but unfortunately, lawmakers in the House of Representatives decided not to take action on it in 2013. As a small business owner, I see immigration reform as a “no-brainer.” It would be good for consumers, small businesses and the economy by creating more stable, trained workforces. Everyone benefits when we allow hard-working immigrants to bring their skill sets to the U.S. so they can contribute to an existing company or even start their own. Furthermore, by giving the 11 million undocumented individuals already in this country a pathway to citizenship, we create more taxpayers and expand the consumer base.”

“It is time for Congress to reform the laws that affect the way the government recruits, hires, retains and rewards federal employees. Title V no longer meets the government’s needs, and the government, like other employers, will struggle to find talented contributors until it approaches talent management from a holistic perspective… Ensuring agencies have the best and brightest focused on addressing big issues such as implementing Medicare and social security reform, national security requirements and veteran support is critical to businesses that partner with our government.”

“I’m hoping for long-term Congressional charter renewal for the Export-Import (Ex-Im) Bank of the United States. Ex-Im provides a unique and valuable service for businesses throughout our country – export finance assistance. By increasing exports, employers throughout the country increase jobs. Additionally, Ex-Im does this great service at no cost to taxpayers – in fact, Ex-Im returns money to the U.S. Treasury. So, why do we have to suffer a protracted, nail-biting Congressional renewal process for such a sensible program? My wish is that Congress will take an early and quick 2014 affirmative process for this upcoming renewal.”

“What we need most from Congress is stability. As an industry, we have all seen the ups and downs of the federal budget. However, unlike the normal ups and downs of the past, we have recently had the threat of budget cuts alongside a disturbingly irregular budget process that has left us all flailing to catch up. Some budget cuts, particularly as hostilities begin to draw down, are understandable and in many cases reasonable. Budget cuts themselves, while not good for the industry, are events for which we can plan and to which we can adapt our business structures. However, nebulous, vague and perpetual continuing resolutions combined with equally vague, seemingly indeterminable, and purposefully capricious budget cuts like sequestration leave all our efforts frustrated and leave business leaders unable to plan or adapt. In this scenario, even the best of companies can falter.”

“My holiday wish is that everyone pays their fair share because my business prospers when the community prospers. Specifically, I’d like to see revenue raised by closing tax loopholes for large corporations and the very rich. We’re at a critical point with crumbling infrastructure and communities being left behind. It’s past time to modernize our schools, roads and bridges, and we need to re-up unemployment insurance for those unable to find work in this down economy. A rising tide should float all boats, but our tax code has made it so this is no longer the case.”

“In 2014, I would like to see Congress address an issue that is long overdue — immigration reform. We need to fix our broken system in a comprehensive way that ensures a pathway to citizenship for all 11 million undocumented people living and working in this country, because immigrants are entrepreneurs and job creators, and they boost consumer demand in local economies. They are twice as likely to start a small business as are US-born citizens, and the businesses they run employ millions of people.”

“I would like to see an end to tax loopholes for big corporations, especially the use of offshore tax havens. As a small business owner, I’m happy to pay my fair share in taxes, but corporations should do the same. Congress should make sure that multinational companies aren’t gaming the system by hiding money offshore instead of paying their taxes like the rest of us.”

Wil Schroter, co-founder and chief executive of Fundable.com, an equity crowdfunding platform for startups based in Columbus, Ohio:

“My wish is for the full implementation of the crowdfunding legislation contained in the JOBS Act by the SEC. Signed into law in April 2012, the JOBS Act achieves two major milestones. First, it removed the 80-year ban on general solicitation (implemented on September 23, 2013). Second, it removes the accredited investor requirement for investing in private companies. As with most legislation, the major benefits are not fully realized until it is fully enacted. To that end, we’d like to see Washington continue to be diligent in its efforts toward full implementation of the JOBS Act.”

“My wish list is for Washington to better define its approach to patent policy and consider the potential unintended consequences of further actions following its significant overhaul of the patent system with the Leahy-Smith America Invents Act in September 2011. Though I completely support the legal pursuit of non-practicing entities, or, as they are more pejoratively dubbed, “patent trolls,” Washington should be aware of the importance that patents play in enabling the development of innovation. As these non-practicing entities have become a target of a diverse collection of political initiatives, the three branches of the federal government have become engaged in duplicative—perhaps contradictory—efforts to reform patent litigation. Ultimately, my fear is that some of those efforts, which are intended to control a handful of companies, might inadvertently capture and harm legitimate businesses and inventors.”

“My biggest wish this holiday season is that our nation’s leaders make investments in clean energy policies that would help our country combat the damaging effects of climate change. Because of increasing heat and drought in my area of the country, I’ve had to make changes within my own business to meet the needs of my clients. In the past, many clients have preferred to use ornamental plants, though they are more vulnerable and require more watering, chemical applications and maintenance. Now, to minimize potential economic and environmental losses, we are encouraging them to use more native plants which are more drought-tolerant, and to amend site soils so they are better able to retain moisture. I’ve been able to adapt to the changing needs of my clients, but it’s not as easy for most small businesses to prepare for the effects of changing climate conditions.”

“As a technology company in the healthcare space, our biggest growth challenge is hiring skilled talent, and more specifically, tech talent. We advertise open positions and receive many resumes but many do not have the technical expertise and experience; those who do, often times require a work visa be sponsored for them. Given the early stage of our company, we are not able to hire college recruits for a year on their student visa, train them, and lose them to the H1B process uncertainty. Many of these talented graduates then have to leave the country, which is a huge loss for us, to educate them and then release them. An immigration reform bill that allows science and math graduates to stay and be employed in technology companies would be a win-win for the country.”

“Over the past year, I have been in Washington a number of times to connect with legislators and try to gain support for many of the things that are on small business owners’ wish lists. Some of the interactions were positive, while most left me feeling discouraged. My holiday wish is to be able to stop wishing for the same things I’ve been wishing for the past five years. It would be refreshing to have action on tax reform, access to capital and so many other business issues. Then I could dream up some new wishes. That would be nice.”